As if the Christian right didn’t have enough to worry about already. First came the notoriously gay Teletubbies, followed by SpongeBob, the Terrible Token of Tolerance. (Following condemnation from the right, SpongeBob was immediately welcomed into the United Church of Christ. Go UCC!) 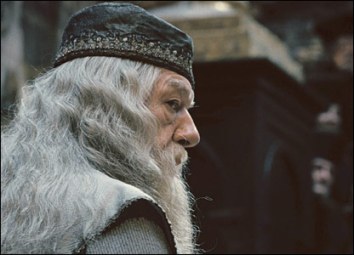 But now, Harry Potter author J.K. Rowling has announced that the beloved Hogwarts Headmaster, Albus Dumbledore, is gay. (That loud “pop” you just heard was the sound of James Dobson’s head exploding.)

I, however, celebrate this news. As others have pointed out, given the still-pervasive culture of shame surrounding gay and lesbian people in America, it’s vital that gay kids have positive role models growing up–in literature as well as in real life.

However, to the extent that past behavior can predict future behavior, we can expect to see continued Christian-driven censorship of Harry Potter with this new revelation. People have already had a problem with the “witchcraft” in the books (this despite the fact that there are blatant Harry/Jesus parallels to be found as well).

Some may ask, “why does this even matter?” or “why now?” Since Dumbledore doesn’t have any apparent romantic attachments throughout any of the seven books, why would Rowling bother to ‘out him’ at this point?

In my view, Dumbledore is one of the greatest father-figures in children’s literature. People of all stripes and prejudices have come to love him; gay, straight and anti-gay alike. Without knowing about Dumbledore’s gayness, people’s perceptions of him weren’t diminished by their preconceived notions about gay people.

Now, months after the story has been finished, we are free to decide for ourselves whether or not Dumbledore’s homosexuality somehow makes him to be worse (or better) than we’d previously thought. I would think that most honest people would agree that he doesn’t retroactively change into a worse person just because of this news.

Kudos to J.K. Rowling for providing us all with a positive, prominent gay role model in literature.

—
Here’s how this Harry Potter fan (and founder of mugglenet.com) answers the ‘why now?’ question.

6 Responses to “Dumbledore is gay. Okay!”

« Domestic and foreign plights of the Congolese
Why did Pat Robertson really endorse Rudy Giuliani? »
%d bloggers like this: