What's wrong with this picture?

I get email from crazy right-wing organizations:

Here is the last call to stand with us and proclaim to our communities that Christmas is not just a winter holiday focused on materialism, but a “holy day” when we celebrate the birth of our Savior. We can do it in a gentle and effective way by wearing the “God’s Gift – Merry Christmas” button. Don’t wait! Place your order by December 1 to receive it before Christmas. 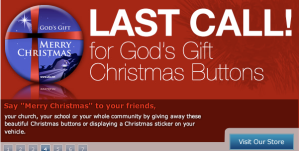 Get that? Christmas is NOT about materialism. So buy our crap!

Neither your God nor your non-God are universal.

As usual, I leave some of my best efforts in other blogger’s comment sections.  What follows is adapted from a response to this post, in which the writer criticizes “progressive Christians” for cherry-picking from Christianity only that which we agree with. Ultimately, I take issue with her/his underlying assumptions.

—
…I don’t know if you read Christopher Hitchens or not, but you and he both seem to be under the same weird notion that in order to be authentically Christian, one must accept everything in the chosen holy books verbatim, and if one doesn’t, her beliefs don’t count. I defy anybody to subject himself to a similarly foolish standard in any other scientific or philosophical field: take all of Plato verbatim, or take none of Plato. Take all of Nietzsche, or none of him. Take all of Sartre, etc. This approach to anything – knowledge, belief, science, etc. – is clearly absurd.

Where did we get this idea that there is no validity to any body of work unless it is all literally true? From Christians? Maybe some of us, sure. But when others of us reject this paradigm, please don’t act as if religion is supposed to operate differently from any other human activity when it comes to how we form our beliefs.

As a progressive Christian, I am a pluralist, which means that one of my foundational beliefs is that God is too big to be fully understood by any humans. Ergo, to quote one of my professors, constructing theology means “groping toward the infinite with the tools of finitude.” Rather than provide a single, unified view of God, I think the Bible’s various narratives and themes instead reflect ongoing traditioning and theological changes and different emphases over a thousand years or more, and such traditioning and changes in interpretation have been ongoing ever since.

I don’t mind anybody calling into question any aspect of faith that is found to be problematic. But I do object to atheists or Christian fundamentalists alike who try to mandate universal definitions to what it means to be Christian, or who God is, or Christ, and so forth, whether for the purpose of rejecting or affirming such dogma. Neither camp is capable of defining the terms and forcing everyone else to adhere to them. So, militant atheists and frothing Christians alike, kindly knock it off already.