There’s been some flurry recently about the hetero Canadian parents who are raising their youngest without revealing the biological sex of the child.  They seem to want to resist the way people typically gender children (and adults), treating them differently according to their gender.

At this point, I’m fully on board.  For whatever reason, we (Western? American?) human beings often act as if we are entitled to know the gender of others, such that it stresses us out if we can’t tell for certain.  We want to know this apparently so that we know how – and to what extent – we might relate to one one another.  Maybe this goes back to wanting to find the best possible mate. I suspect it has to do with being able to treat people differently, or expect different things from them, or apply any number of other social norms upon them according to their privates, and frankly, how many of us really believe that it’s important for us, as individuals, to make such genitalia-based considerations?  I know I don’t.  Yet, by default, I gender people all the time, and seek to “know” other people’s gender when the lines are blurry.

But I am in no way entitled to find out this information about others, now am I?  What a strange pattern of behavior.  We should really question our underlying motivations for wanting to know the biological gender of others as prerequisite for interacting with them.  As a parent, I can understand not wanting other people to ‘gender’ my child and treat her according to whatever crazy notions they hold about how girls should be treated.  I get that.

Be a gender superhero!

And, having said that, I think that “gender-neutral parenting” is problematic.  It seems akin to people who profess to be “colorblind” when it comes to race.  Only a small fraction of people are actually colorblind, and I’m betting that even most of them are capable of discerning between different shades of skin color.  We have color.  And our color is often different from others.  And most significantly, the reality of different skin colors has been imbued with tremendous social meaning for hundreds, if not thousands of years.  By declaring ourselves to be “colorblind,” all we are doing is playing “let’s pretend” so that we might ignore the painful reality that our society still doles out unfair advantages and disadvantages based on color to this very day.  We have color.  And that matters.

So too – we have gender.  And that matters.  Gender is one way that we are different from one another – and it is a particularly embodied way at that.  To try to minimize and hide this difference from others, no matter how grand the intention, strikes me as an attempt to ignore or push aside a difference that is very real, maybe even important, and, by the way, one which is perfectly fine.  It’s okay, it turns out, to have a vagina, and not a penis.  Or vice versa.  Or something in-between.  The particularity of each human body is perfectly wonderful, according to God and nature.  Where there are problems, they belong to us, and it is up to us to adapt our social norms, roles, and expectations accordingly.

All that is to say, I am more in favor of abolishing the traditional limits associated with masculinity and femininity then with abolishing gender outright. There’s nothing wrong, in my view, with claiming and celebrating the particularity of one’s own gender. But there’s a lot wrong with imposing norms on others based on their gender.

Why I support gay marriage

This past Monday was my one-year wedding anniversary.

While I am thrilled to embark upon Year Two with my lovely bride, I have been more anxious than joyful about marriage these days.  No, not my marriage (though there are joyful and anxious moments there among many others), but the marriage rights of thousands presently under siege in California via Proposition 8.

Prop 8 is the effort in California to institute an amendment to the state constitution that will prohibit gay and lesbian people from being allowed to legally marry.  Earlier this year, the California Supreme Court overturned existing prohibitions against gay marriage and effectively legalized gay marriage.  Now, there is conservative backlash in the form of this proposed constitutional amendment that defines marriage in California as being between a man and a woman.

I believe that to deny LGBT people the right to marry is discriminatory, immoral, and anti-Christian.  (I’m sure it goes against tenets of the faiths of many others as well, as well as those who have no faith, but I personally write from a Christian perspective.)  I support equal marriage rights conferred without regard for the sex, gender, or sexual orientation of those involved, for the following reasons:

END_OF_DOCUMENT_TOKEN_TO_BE_REPLACED

Spirit Air, an airline company that I’m pretty sure I’ll be ignoring from here on, has a new marketing campaign: “M.I.L.F.” Ostensibly, it stands for “More Islands, Low Fares.” But ask anybody under the age of 40, and “M.I.L.F.” has another meaning: Mom I’d Like [to] F–k. See the picture to get a better view of what I’m talking about. The reclining woman below appears for less than a second before morphing into generic islands. 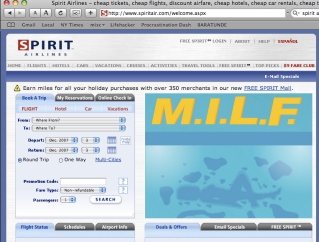 But when people discovered this pathetic excuse for an ad and complained about it, Spirit Air’s response was to outright lie about it! From ABC:

Okay, here’s the thing. It’s one thing to have disgusting, sexist, cheap, and tawdry advertising for your company or product. The point of this post is not to condemn that sort of advertising outright, though it should be condemned. The point here is to call Spirit Air out for having the audacity to actually lie about their efforts here. For some inexplicable reason, they are claiming that this clear, deliberately-sexist advertisement was entirely accidental.

Bullshit. Sorry, Spirit Air, you can’t have it both ways. Engage in the objectification of women for your advertising purposes, and be condemned rightly for it–but don’t try and insult the intelligence of the rest of us in the process.

Wow, that’s classy.   For a good sense of what Spirit Air is trying to associate themselves with, type “barely legal 18” into Google and see what happens…